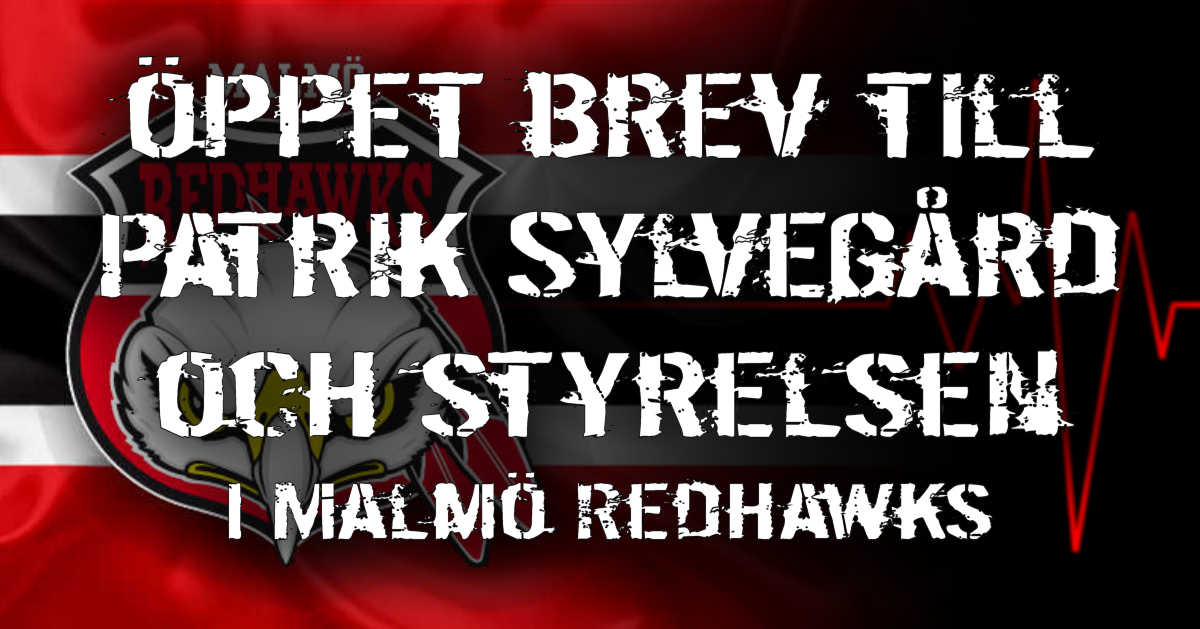 Open letter to Patrik Sylvegård and the board of Malmö Redhawks.

Dear rulers, influential people and people with all kinds of top positions.

Now we can not take it anymore. Now is the time for strong action.

No matter how much we want to suppress the fact that the season has been completely lost for quite some time, we must all now be honest and realize the truth. This effort has failed and now that 20 matches remain, it appears with all the undesirable clarity that something must be done about the situation with Malmö Redhawks lacking results. Maybe it's already too late, who knows. Maybe the train has already left for the season and qualifiers are no longer inevitable.

Whatever the case, those of you who are in power owe it to the players, fans, sponsors and everyone else involved to show that you do not completely shit on what it looks like. Outwardly, for those of us who have no transparency whatsoever, other than what is hidden behind paywalls in the media, it seems so. The passivity, acceptance and indifference that has been shown during the season has been striking. Patience and processes have been preached. The answers have been slippery and there have been evasions, explanations and platitudes. The only thing that has been missing is action.

While other teams have acted early and with concrete measures, Malmö Redhawks have done absolutely nothing. Note that it has not always helped with measures for the teams that have taken them, but it has at least been done with the intention of trying to change the situation. It has been understood that one must try. There has been a kind of decency in that ambition. Even if it goes badly, you have done everything you can to change it.

If we lose our SHL place, we must at least afterwards be able to state:

"yes, it went to hell, but we still did everything you could ask for. We recruited new players, we replaced the team management, we made a complete retake in the entire organization to try to save ourselves and it did not work. But we did the hell in me all we could to make it possible to hang on. No one can take that away from us."

Now we demand that you take your responsibility away from management and pull the emergency brake. You can no longer pretend. It is obvious to anyone with a connection to reality, that this will not work. What indicates that there is some kind of dramatic improvement around the corner? How can you, with an honest face, maintain that it will get better? There have been 32 matches and the situation has more or less, been terrible, in all parts of the team, from day 1.

There is something fundamentally wrong with this team and not all mental coaches in the world can make us score points. Our coach does not know why we do not succeed and seems totally paralyzed after every loss. Our sports manager has not succeeded in a single new acquisition in recent years. The team is in ruins and no one seems to want to take responsibility for anything. There is a lack of leadership and there is a lack of control. It is taken on and off the ice. The players are obviously not feeling well and all the problems that have been in the group seem insoluble, at this point.

It's time to make tough decisions. Not for your own sake, but for the sake of the team, the fans and the city. Put your own prestige and damned pride aside, your careers come second, do not let vanity and self-interest stand in the way of the team's best.

It is your duty and your responsibility, in the leading positions you hold.

To continue to hide, is to disappoint everything you are expected to stand for.

If you do, you will lose the few fans who are still left.

Act, before it's too late and our team is relegated, with all that entails.