Centrally located in the expansive Öresund region Hyllie. The business is of a broad nature that satisfies different specializations in sports, entertainment and food. The arena offers first-class events of all kinds and organizes, among other things, conferences, congresses, fairs, exhibitions, mingling and parties.

Malmö Arena has hosted a wide variety of events such as the Eurovision Song Contest, the Junior Hockey World Cup and the X-ray week congress.

Malmö Arena is a sports and event arena in the Hyllievång district in Malmö. Malmö Arena was inaugurated on November 6, 2008. It has a capacity of approximately 13 spectators at sporting events with standing stands. The arena was designed by Pöyry Architects and Wingårdh's architectural office with Byggteknik in Skåne as the building designer.

In Malmö arena there are 72 lodges. The total gross area is 51 m000 and the internal free ceiling height is 2 meters. There are a large number of restaurant and bar places, more specifically 22,5. If you want, you can visit one of Malmö Arena's fast food places and kiosks, which are 3 in number. For everyone's convenience, there are 250 toilets. Of course, Malmö Arena is handicapped accessible, there are handicap spaces. (+ 20 pcs. For assistants). Ice hockey will be experienced live, in Sweden's best arena.

BW Malmö Arena Hotel is directly connected to Malmö Arena. In the immediate vicinity are the Malmö Fair and the well-visited Emporia shopping center. Best Western Rewards is one of the hotel world's leading loyalty programs. 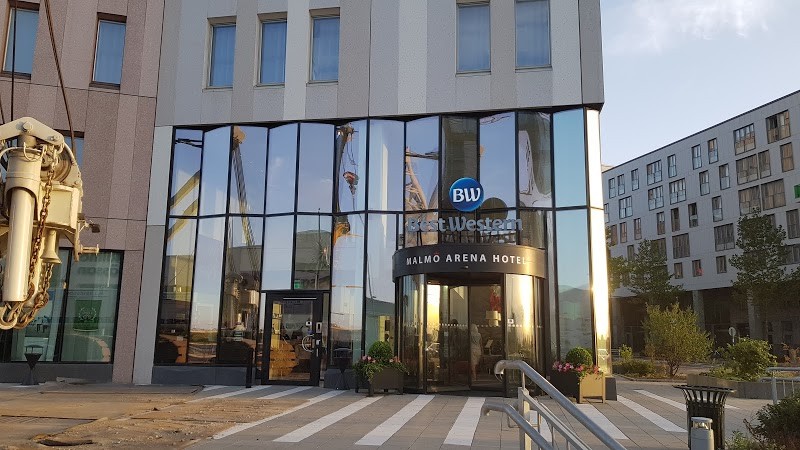 Earn points on your accommodation to spend them on a variety of offers and services such as car rental and free nights. For hotel guests there is an indoor and outdoor gym, sauna and hot tub. The hotel's courtyard has boules courts that can be used by hotel and conference guests.

You can visit the adventure pool Hylliebadet and the water park built around Hyllie Water Tower. The Hyllie district is in strong growth with companies establishing themselves at the same time as new homes are being built. Please note that the hotel and restaurant are cashless but accept all cards.

Local area Hyllie
Hyllie is the hub of the expansive Öresund region also known as Greater Copenhagen. The area aims to become the region's most sustainable district.

Hyllie is located midway between Inre- and Yttre Ringvägen, which means that you can easily get around by car. For car-borne hotel guests, a garage space is offered for rent, "only applies if space is available at check-in at the hotel"

5 courses with WPT grass, Mondo Supercourt and 9 meters free ceiling height. Booking is made via the app MATCHi or on MATCHi's website - click here to get to the booking. Racks can be rented and balls / drinks / snacks can be bought at the reception at Malmö Arena Hotel. Arrive well in advance of your playing time when you rent racks. The age limit for playing is 18 years, or in the company of a parent. Malmö Arena Padel offers private booking, beginner lessons, corporate events and a hotel package.

Padel tennis (or just paddle) is a really big sport in South America and in some of the southern European countries Spain, Italy, France and Portugal. Argentina has the largest number of practitioners of these countries with over 4 million players.

In Europe, Spain dominates in membership and having the most talented players. The largest in Europe is Spain with about 2,4 million practitioners. Padel as a competitive sport has 19 member countries in the international federation, of which Sweden is one of them. The European Championships and the World Cup are held every two years.

Padel is a very simple sport to play and is best explained as a mix of tennis and squash. The size of the course is 10m x 20m and surrounded by 3 meter high glass walls that may be used in the game. The middle of the court is divided by a net and you always play double.

The great thing about paddle is that anyone who can hit a ball can get something out of the sport. You do not need to have any experience in racquet sports to be able to enjoy the sport. Padel is very fun and easy to learn, fun for those who want to try something new and varied for those who are looking for something social. Padel can be played by anyone regardless of gender or age.

Rules
- Always played in doubles (4 players).
- The same calculation as for tennis.
- Each point is started with an underhand serve, which means that the racket must not hit the ball higher than the hip.
- At the first point of each game, the server should be to the right of the center line and serve diagonally. The ball must go over the net and bounce in the server box. Then you alternate side.
- When serving, it is not allowed to hit the side grille after bouncing, only the glass.
- Two serves as in tennis.
- The lines are only in use at serve, after that the entire course is playing field.
- It is allowed to play volleyball and half volleyball. The ball may also bounce in the ground and up on the side / back wall before hitting it back to the opponents' side.
- It is allowed to hit the ball in the glass walls on its own half of the field to get the ball over to the opponents' side.

Lost points
- If the ball bounces twice on your side or a player is hit by the ball.
- The ball must not be played directly in the opponents' walls but must always first hit the ground.